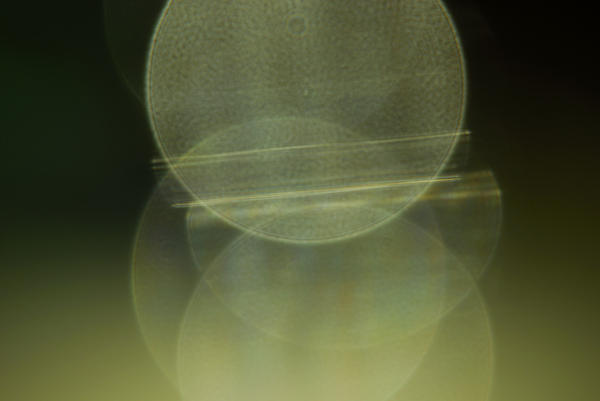 Photographic Phrases: Abstraction in the work of Carl Berg

By Katherine Newbegin
All photography is abstraction in the sense that it can only capture the very skin of the thing and not its essence.1 In his current body of work Carl Berg plays with the concept of how to represent the aura of places and objects. Berg photographs and prints his work digitally, however, at no point does he alter the images. As the artist states, these photographs are all “actual camera captures not computer constructions.” This is a critical distinction in considering the images, as it allows them to act as direct representations of our physical reality. Berg is permitting the medium of photography to act in its true nature. As a result, the context for Carl Berg’s work is tied deeply to the history of photography and artists working in the realm of photographic abstraction.

Through his deliberate framing, study of texture in surfaces, and choice of subject matter, Carl Berg evokes the abstract photography of Aaron Siskind. However, Berg’s desire to elucidate the “elements of expression in objects not ordinarily seen as communicative” is different than Siskind’s motivation. Siskind describes finding himself as “involved in the relationships of these objects, so much so that these pictures turned out to be deeply moving and personal experiences.”2 He is searching for an intense emotional experience, whereas Berg desires to bring forward what is hidden or unnoticed. The inner world of Berg has more to do with revealing the “depth and complexity” of what is initially overlooked, of breaking the skin and going beneath it. Siskind, on the other hand, seeks a connection with the outward world.

In 1944, Aaron Siskind created a series titled Gloucester Rocks, where he found the objects to be very alive, so much so that he could “hardly bear to walk over the rocks.”3 In the work by Carl Berg titled Sand, Montauk, a very flat, almost linear space is described, similar to that of Siskind’s rocks. The form shifts upon each viewing. Just like Siskind’s work, the scale is unclear and the diagonals and tonality of the image sustain a mysterious feeling, almost as if it could be a mountainside. The diagonal movement of the sand echoes the same gesture in another photograph titled Wall Shadow, Laos. In this image, the diagonal shadow above the facet crosses rigidly, breaking the image in two. These two images are side by side in the exhibition, resulting in a dance that seems to occur as the diagonals move back and forth.

Whether the image is from Laos or Montauk, all of the photographs of Berg maintain a very similar tonality and feeling, even the ones that are, in fact, representational. The camera’s power is to focus the mind on a limited area. Berg’s framing is a reminder of what he recognizes and points to as home when he is scouring for images. The surface of the pictures has a clear consistency to them. When one travels, the environment and the desire to go beneath the surface of a location becomes more apparent, or perhaps Berg is recognizing something familiar and feeling the urgency to describe that. Whatever the interior process of Berg may be the result is clearly drawn from a desire to describe the texture of the thing.

A second image of Berg’s that reflects this experience of texture, tying it to Siskind’s work as well, is called the Oaxaca Wall. The flesh color of the broken wall emerges from deep underneath the old posters, glue has scarred the concrete. The picture is laden with the history of this wall, and a collage is formed. In the right corner blue text from a dance club poster appears, and paint peels against the outer edges of the frame. An unfolding appears to take place here. Siskind describes one of his own wall photographs from Mexico, “I place a configuration in the frame in a certain way which makes it more delicate – gives it a swing here and a bloom there…”4 Berg’s image unfurl before us and reveal something that can be easily missed. The wall holds a sense of possibility, of a chance meeting, or a moment of passing strangers.

In the work titled Face, NYC, Berg again dislocates the viewer by using scale. It almost looks as if it is a lake or a geographical feature. He pays true homage to painting here. The tonal values, shifting forces, and gestures, lead one to identify a figural allusion. The title also gives away Berg’s decided interpretation, he points us in the direction of looking for a face, yet no face easily appears. We are confronted with something hidden that needs time and space before it will reveal itself to us. Berg forces the viewer to slow down in this moment and reflect inwardly. The lights and darks fade in and out. The image seems to twist and break, and there is almost a subtle violence to it. The artist’s choice to use what is practically a black and white palette, certainly points to another era.

Carl Berg has manifested a body of work, which forces its audience to move subtly through it. He begs the question of naming how much is missed in a given moment as we rush through our days, through our lives. He professes a silent world, where if time is truly given, then secrets are revealed and the images will unfold and blossom before us. He studies the skin. He searches for traces. He roams scrutinizing the surface of his world for that moment when the abyss willingly breaks open and swallows us whole, for the moment when depth gushes forth before us.